Welcome to the second report page for the Euro section!

Today I have some time to see the local area before we hit the road to visit the nearby city of Meknes for the opening of a new Gym/Dojang training facility. On the way back, we also visit another Dojang, and then back to the hotel about 10:30pm, for a 3am alarm to catch my 6am flight, some nights are way too short. CGN Yassine volunteers to be crash dummy for the Pain face and we grab the picture in the hotel lobby, talk about getting the job done. Some of you might question a missing pain face from The Netherlands, but don’t worry I am teaching there again this weekend, so it will be done! It has been a good first visit to Fez, the food was all good, the people friendly and helpful, and the future of Hapkido here looks bright. 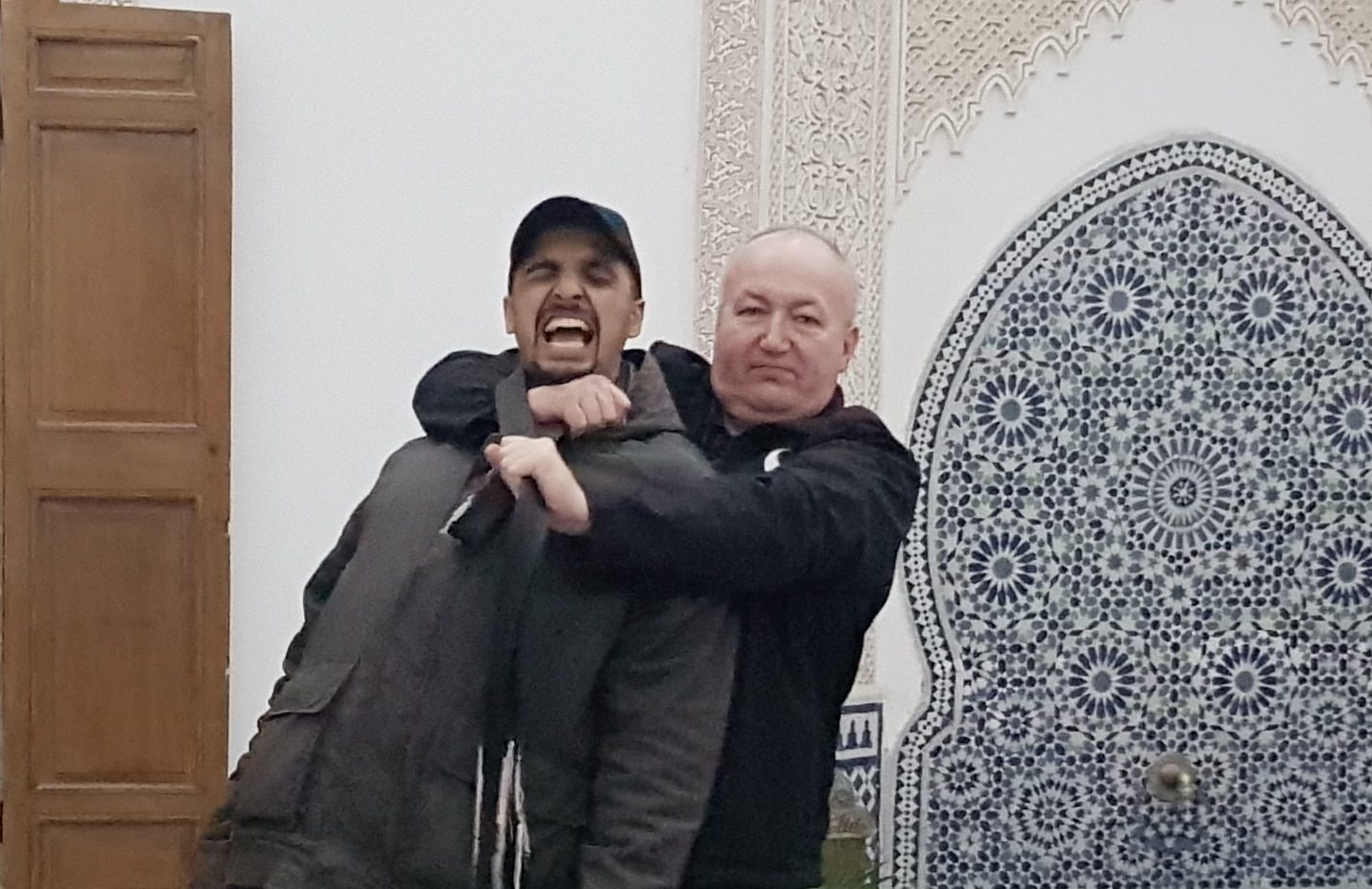 Fez airport looks rather new and is incredibly clean & shiny, if empty. I think I only saw about a dozen flights leaving over the entire day. I checked in and was given directions to take the fast track entrance, which also happened to be the crew/diplomatic entrance, the first passport check (#1) was fine and the sent me back into that entrance that was a mistake, I get stopped for another passport check (#2), it’s not diplomatic, so a bag search, then a supervisor (#3), then I can continue to the metal detector. Of course, they also give me the what the hell are you here for look and passport check (#4). They still send me on my merry way down the diplomatic immigration line which is strange for a domestic flight but apparently the only to transverse the airport. There is no one at the Diplomatic passport box, so a disgruntled officer waves me over (#5) and he tells me I am in the wrong place, after he checks my passport I get to see yet another guy (#6) before I get to the departure gate. So, it looks like Fast Track get to use the Diplomatic lane but no one told the Airport security, which are in fact a branch of the Moroccan Police. 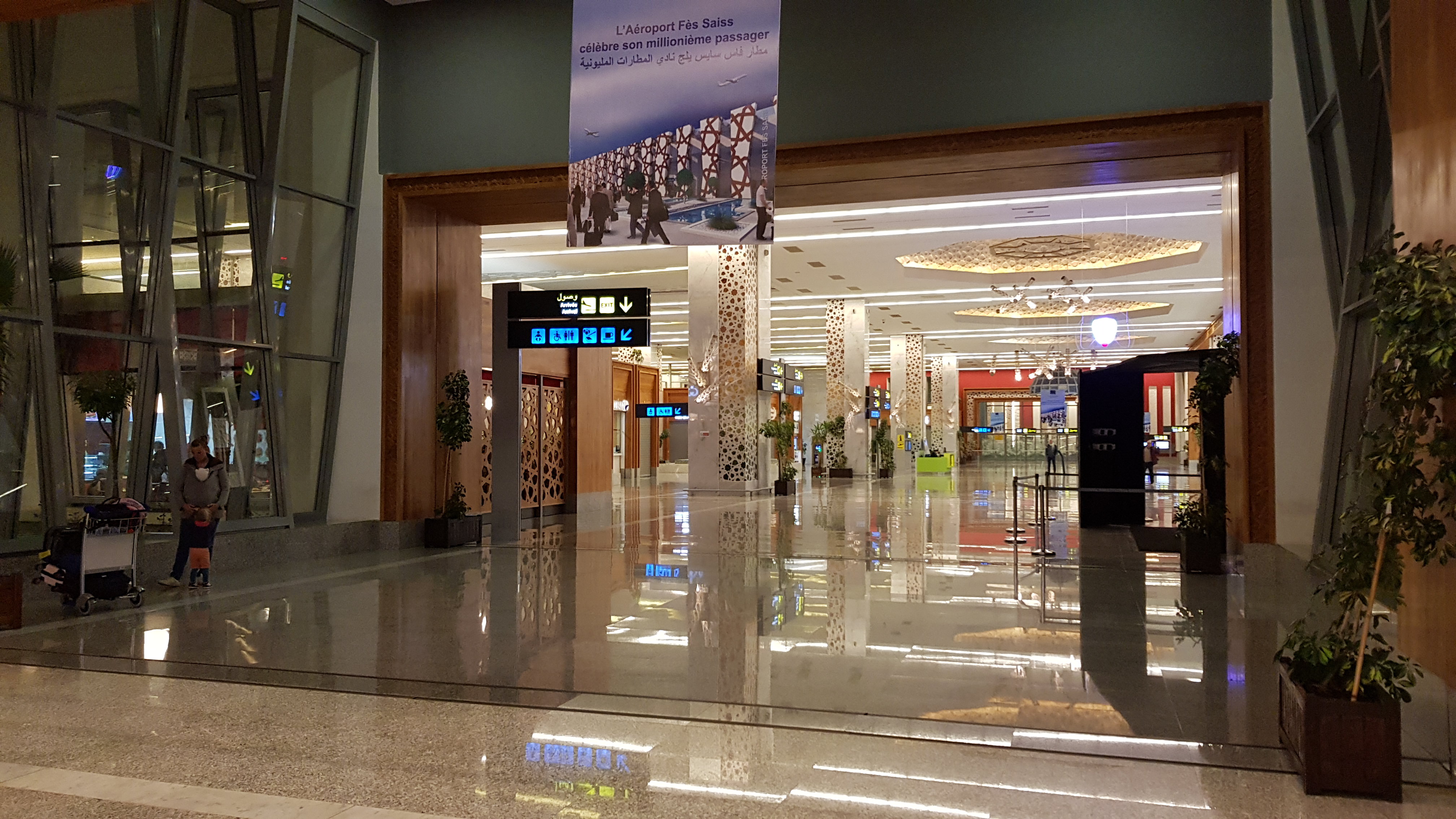 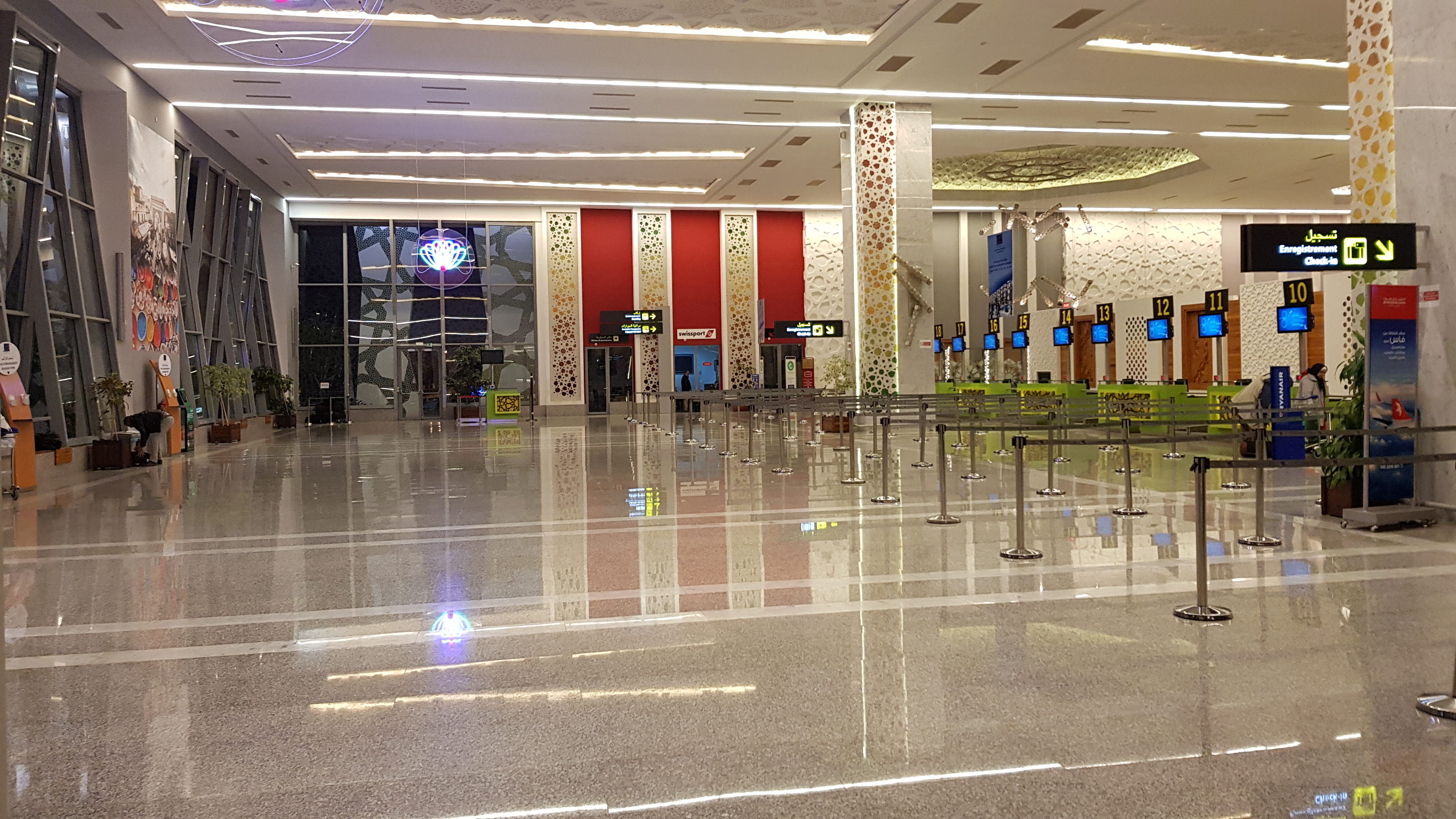 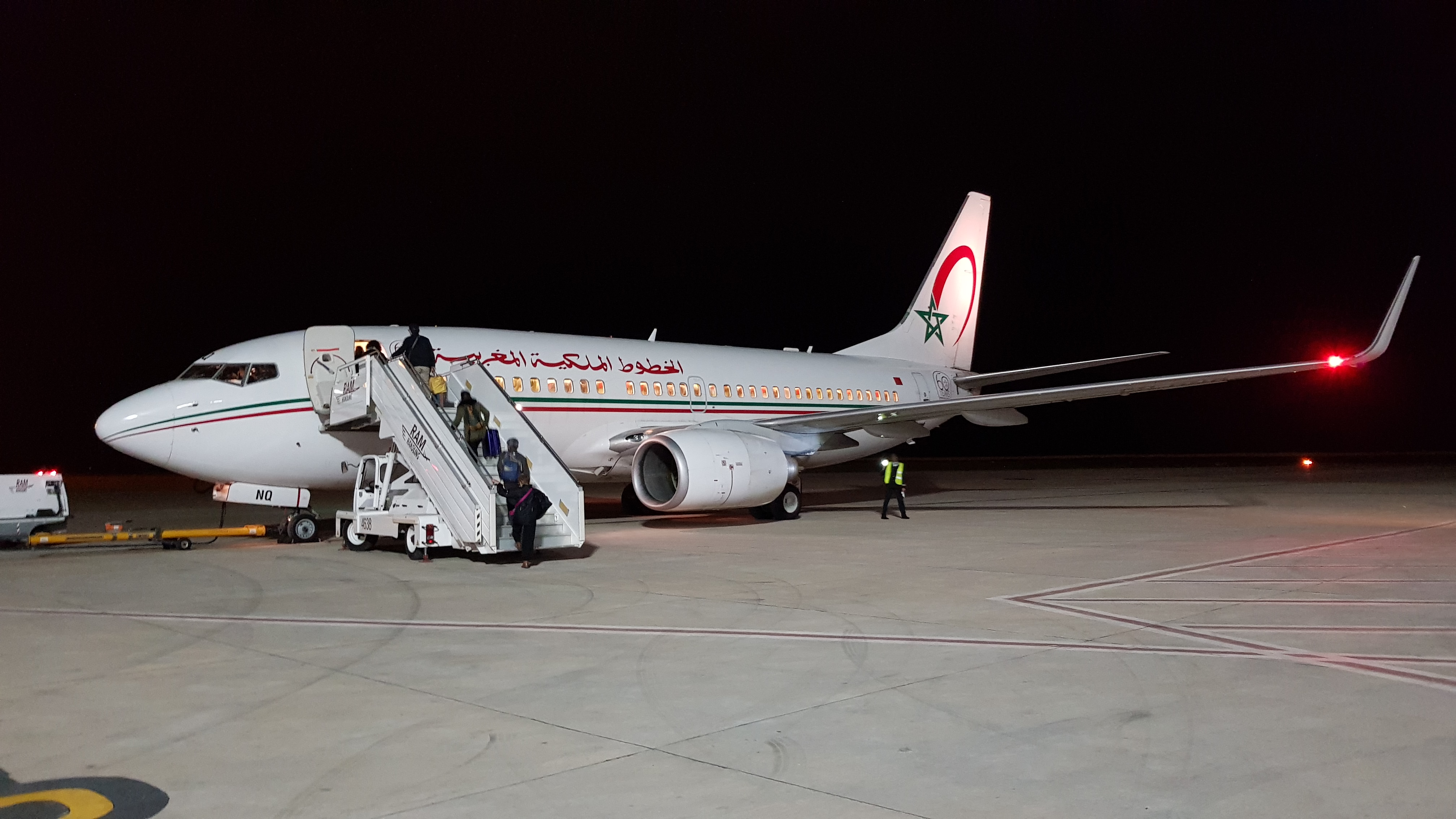 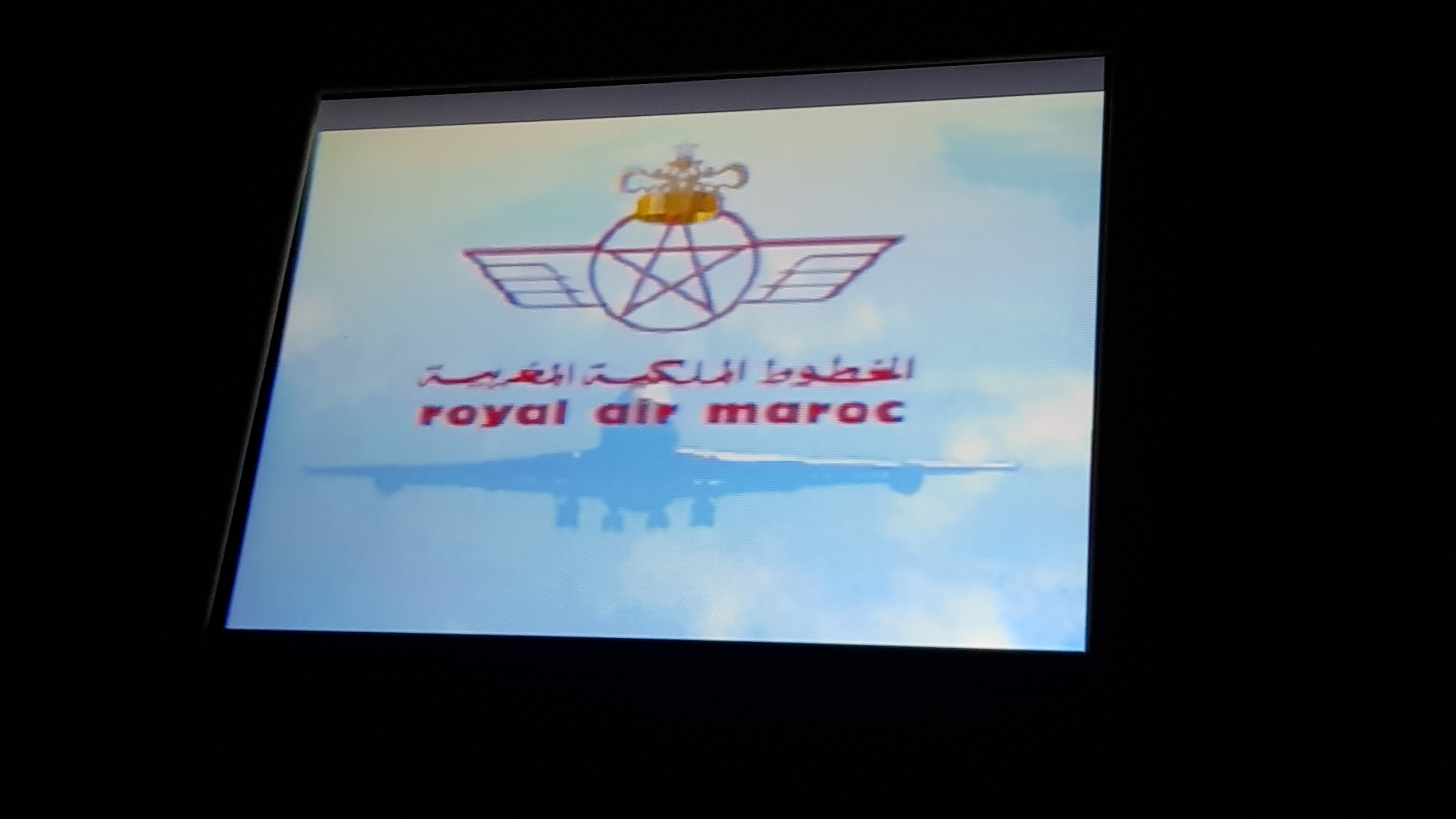 The flight was smooth and the plane was very empty, It was the first time ever that I had flown without the safety briefing being repeated in English, on this flight Arabic and French (I have been on flights with 3 languages, like Lufthansa Bangkok to Frankfurt – German/English/Thai). On arrival we again got routed through immigration but when I told them I was from Fez they waved me through. Grabbed my bags and the train into central Casablanca. I want to add to my traffic comments, it is far more chaotic in Casablanca (Casa is the locals reference), indicators are only used for hard turns not lane changes, lanes are in fact fluid, no one sticks to a lane and being in a round a bout does not give you right of way, beyond that the horn is your friend. 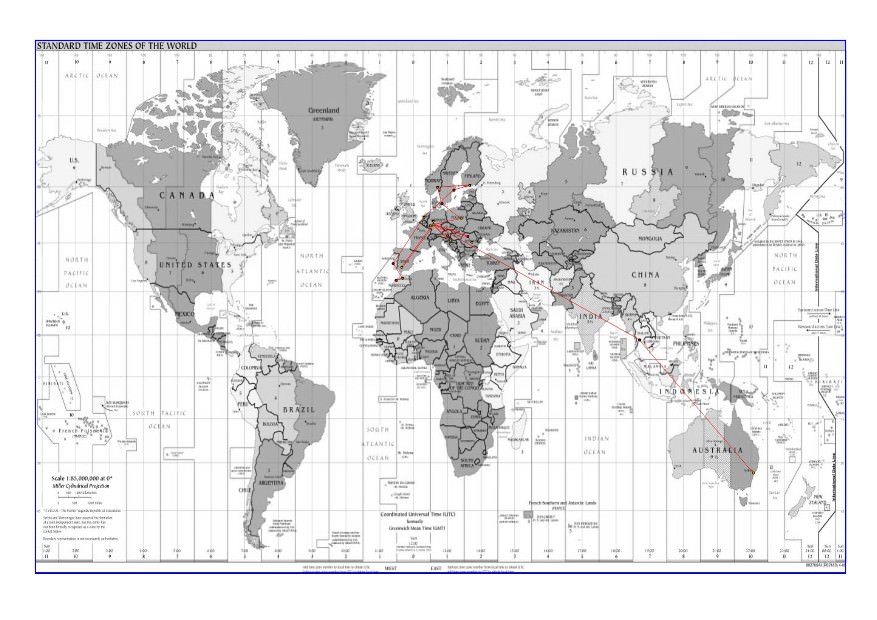 *Side Note* Morocco – Is actually a Kingdom under King Mohammed the 6th, and Islamic with the language being Moroccan Arabic which is different to the standard Arabic. It actually has a smoother sound and you can hear the French influence, it is also common here for people to speak French. Everyone enjoys the ‘whiskey’ which is actually a very sweet Green Mint Tea, and Couscous is the national dish, soccer the national sport and the lion the national symbol. Police cars have Red/Green lights like the flag of the country. 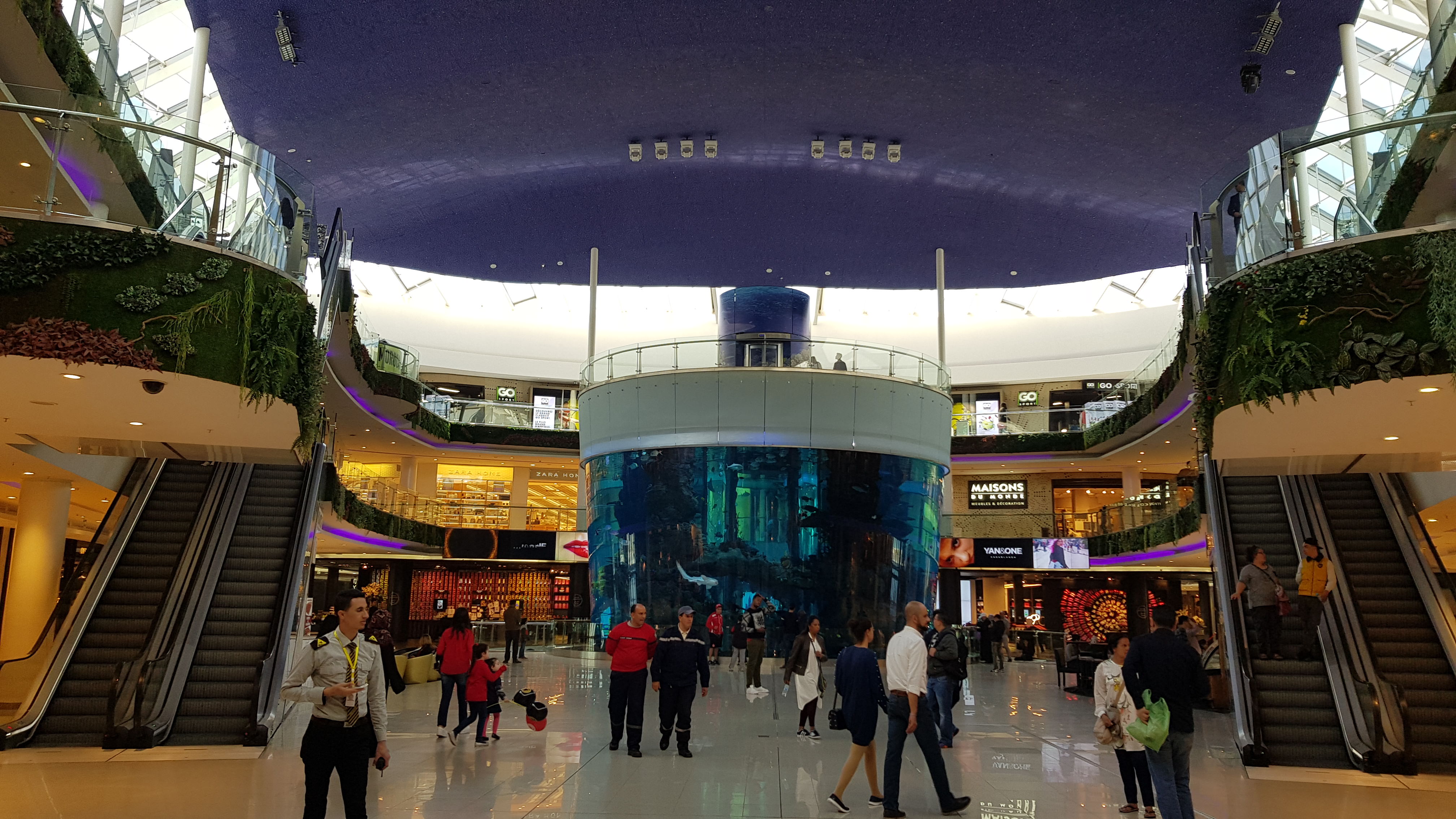 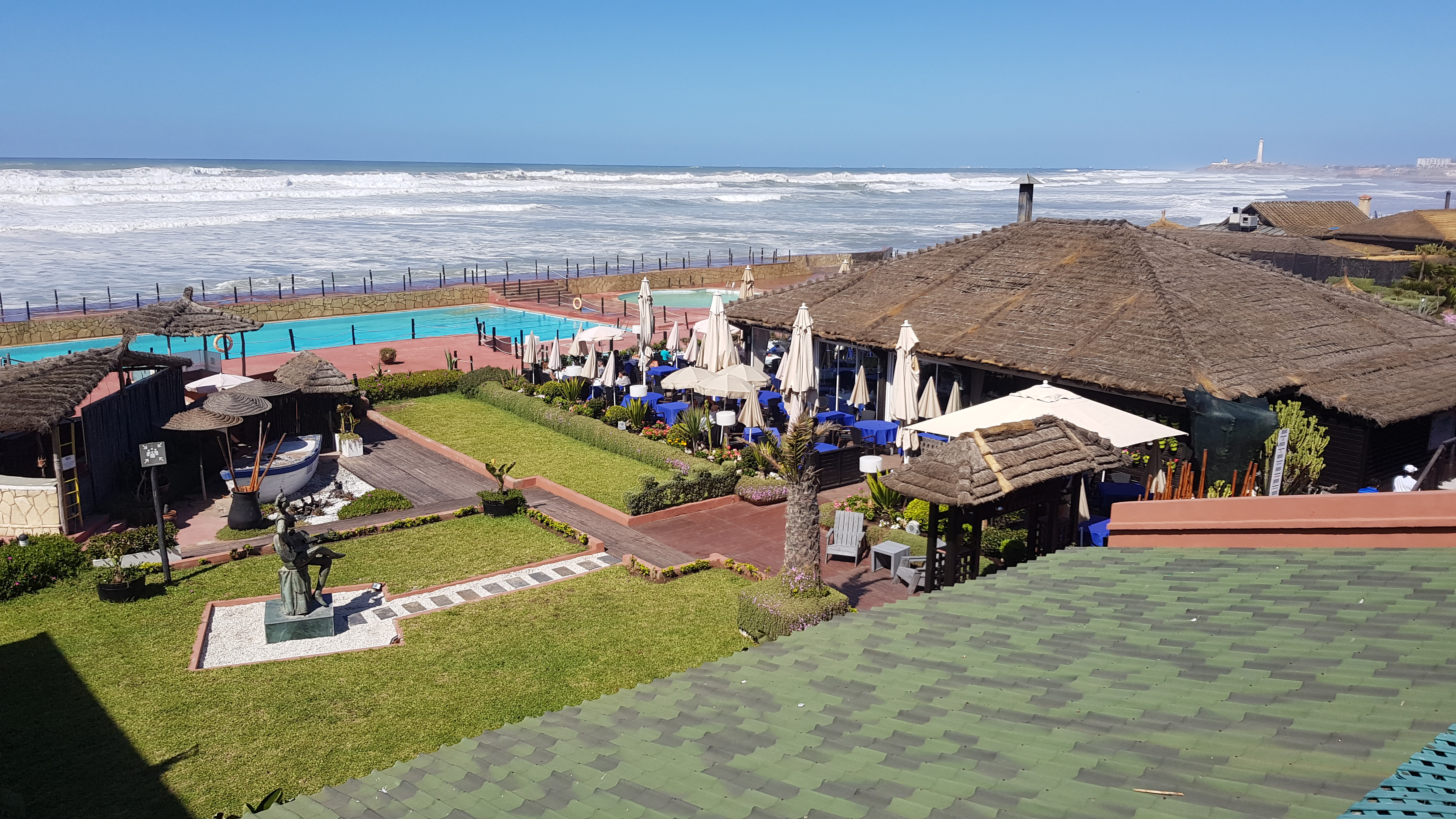 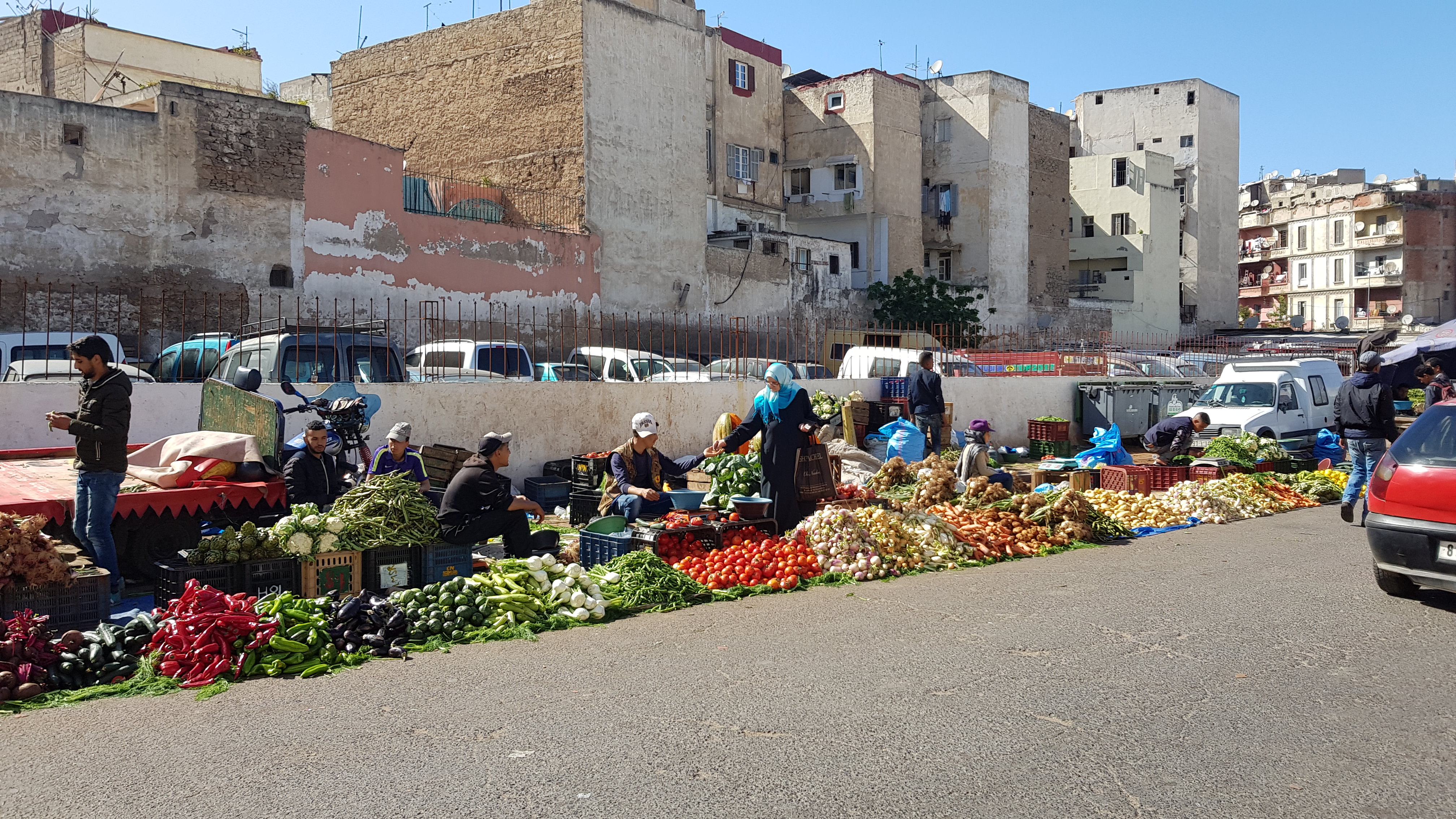 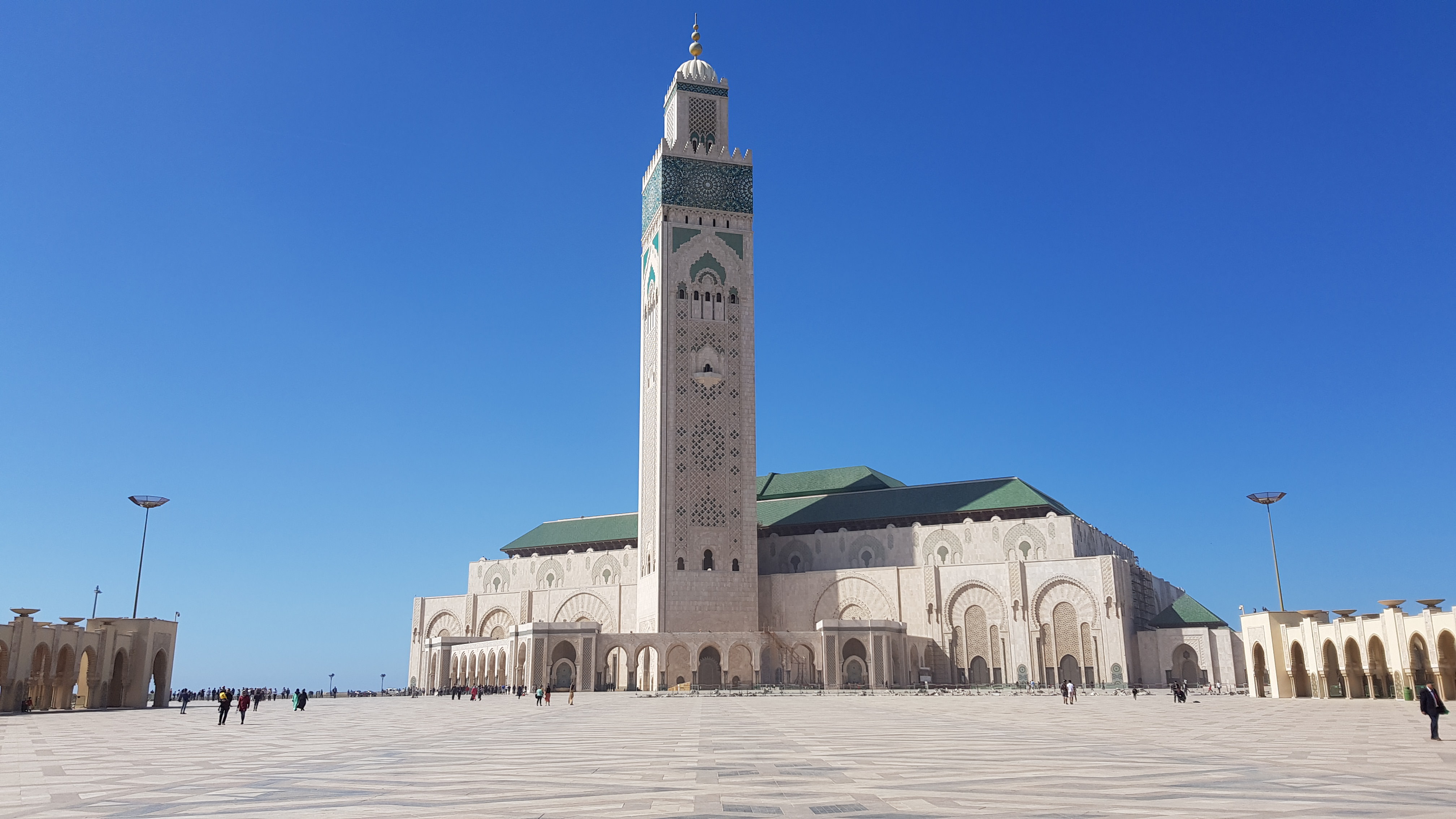 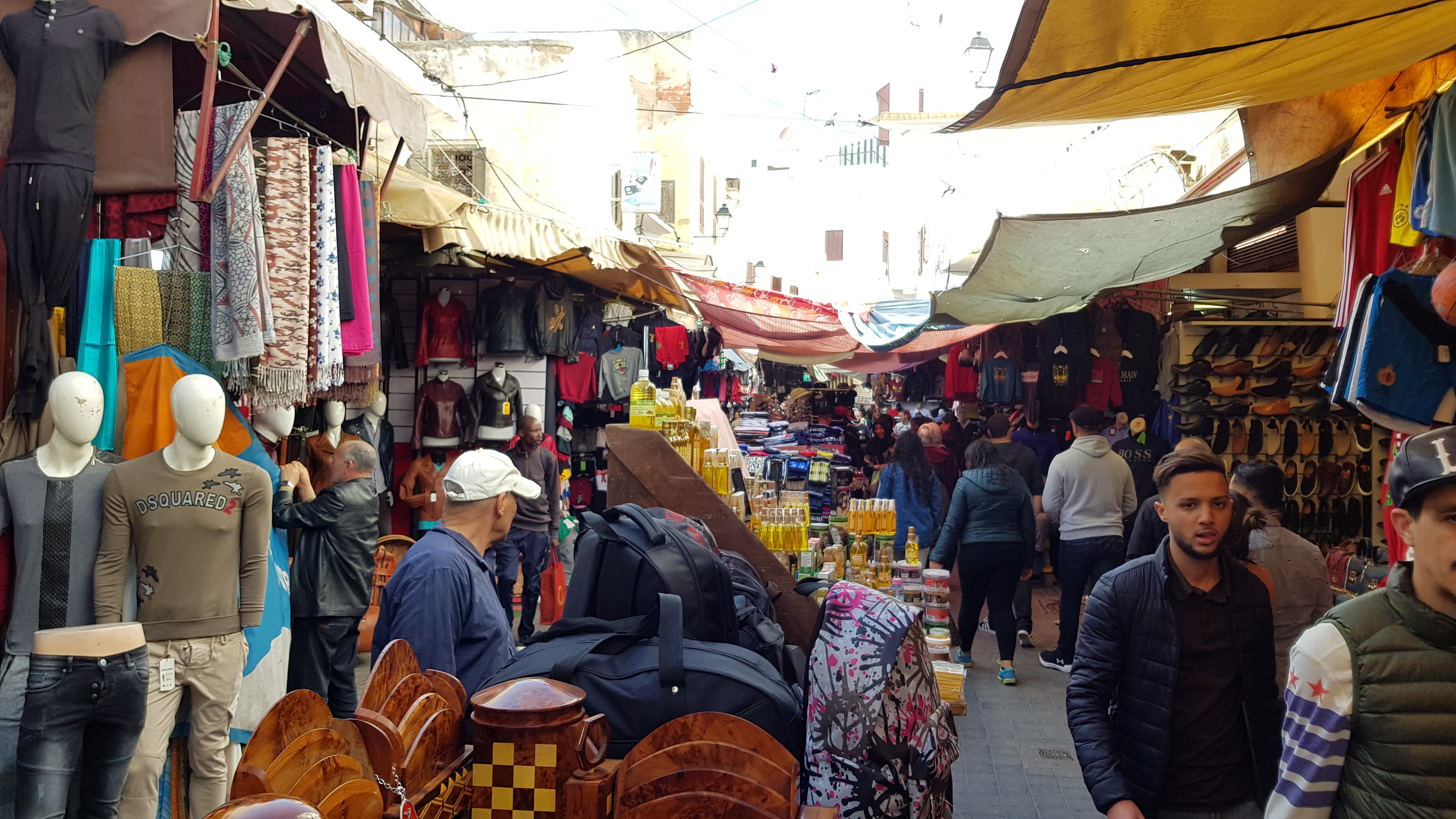 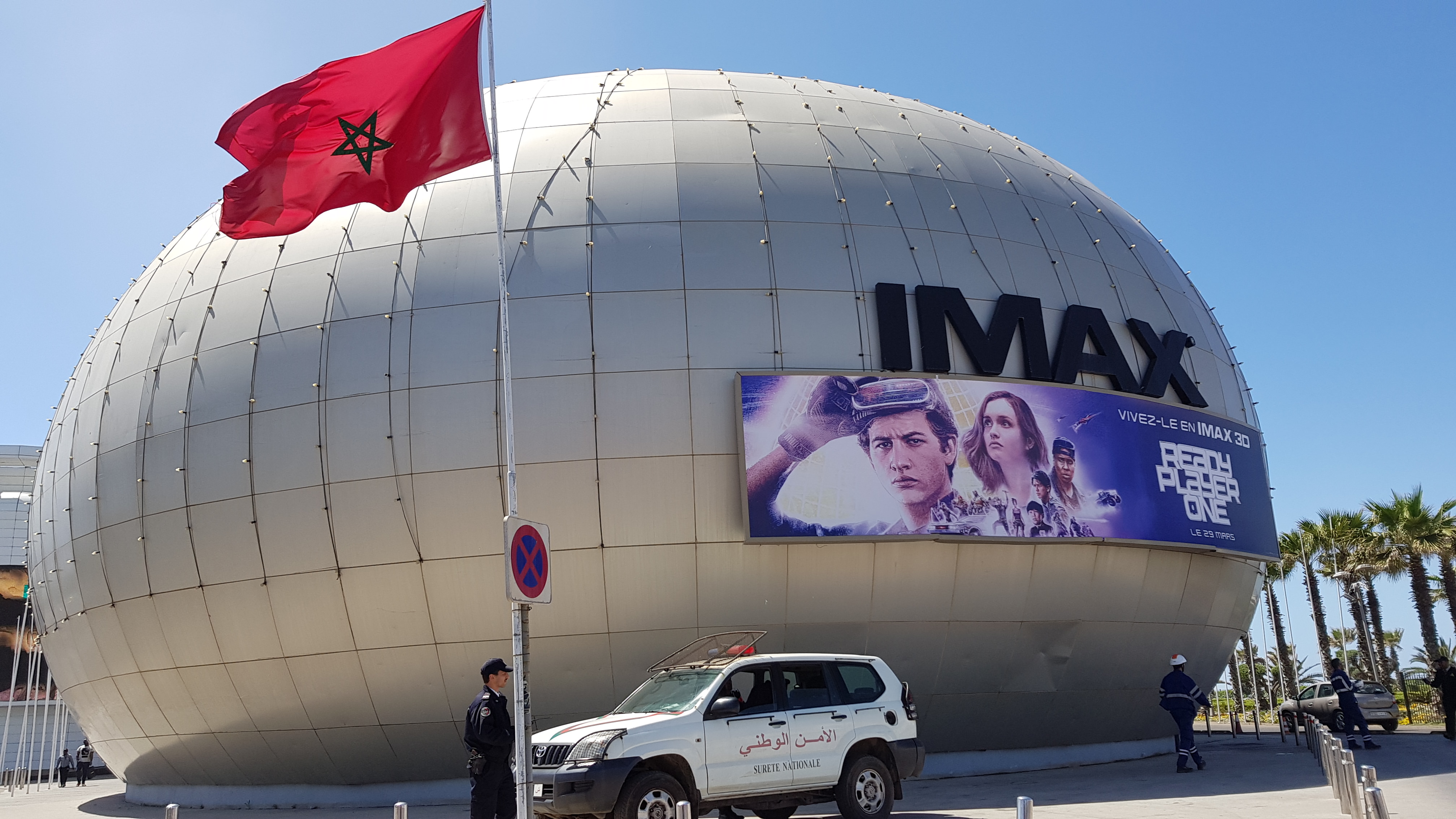 A couple of decent meals, some sight-seeing, a movie, catching up on some sleeping as well as trying some of the local activities. In this case a shave from a local barber, about 45mins of lotions, massage, hot towels and shaving for less than $15. Also, I tried one of the Hammam’s (Sauna/Spa), the large stone table gave me flashbacks to my Mexican adventure, but it was relatively relaxing apart from some vigorous scrubbing with a brush, but if you are over this way it should be on the list to try. If I sum up Morocco, it is quite different between the oldness of Fez (Mainly Arabic spoken) and the modern feel of Casablanca (More French spoken). I found the people to be friendly and helpful if asked, the food was good (no bad meals), the weather excellent, some great sights and easy to get around.

I bid a fond adieu to Casablanca, and grab my next flight, this time back into Europe for the World Martial Arts Seminar and International Martial Arts Hall of Fame being held in The Netherlands. I think most of you have an idea on my feelings for Martial Arts Hall of Fames, still for this one there is a very large group of people attending seminars (last year ~150+), it gives both myself and Team IHA Holland a chance to show some IHA Hapkido. Almost the same amount of passport checks to get out of the country as to get in, they take security very seriously around here. 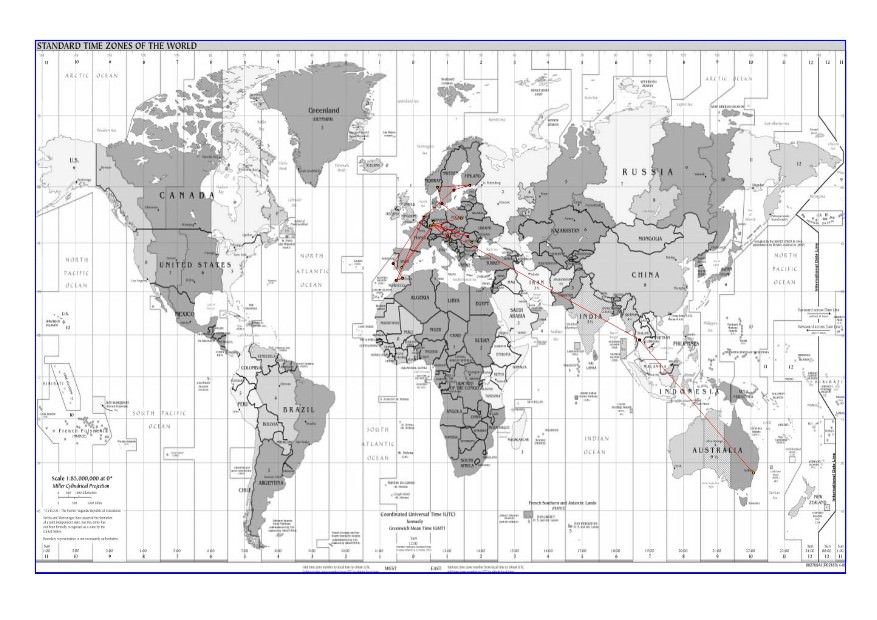 Touchdown Amsterdam and I am met by one of the Hall of Fame group for the drive to the Hotel where the Seminars and Awards are being held. A quick check in and then down for the meet and greet dinner where I get the chance to chat with a bunch of Hapkidoist from Germany and The Netherlands. It is always interesting to hear others talk about their beliefs on the history and technical structure of Hapkido, lets just say no one was injured in the lively discussion that took place, and the rest of the table agreed when I told them that I can be a Pain in the @%$, even if I was right. 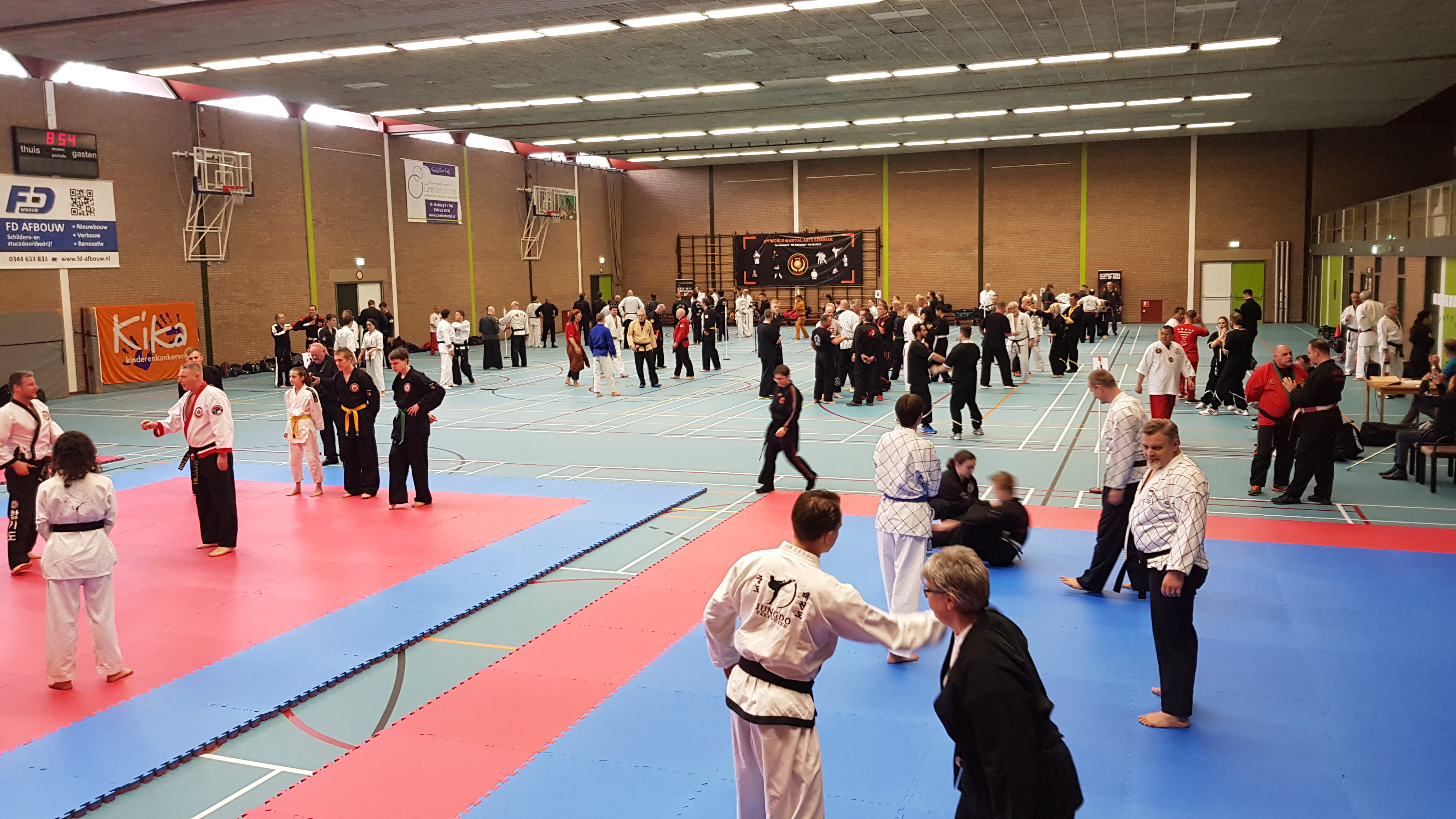 The seminars for the Hall of Fame are underway 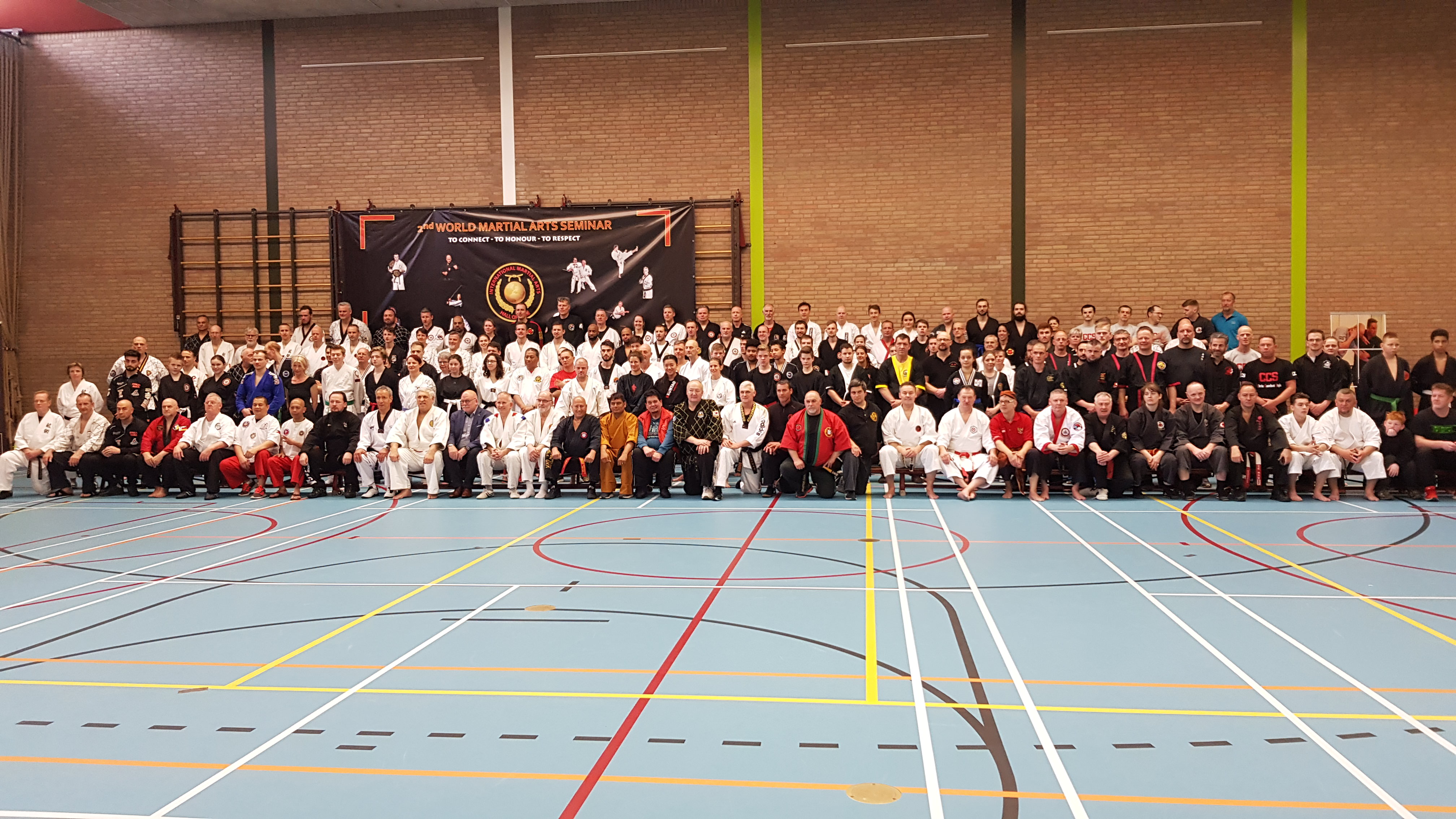 The Group from the Hall of Fame seminars 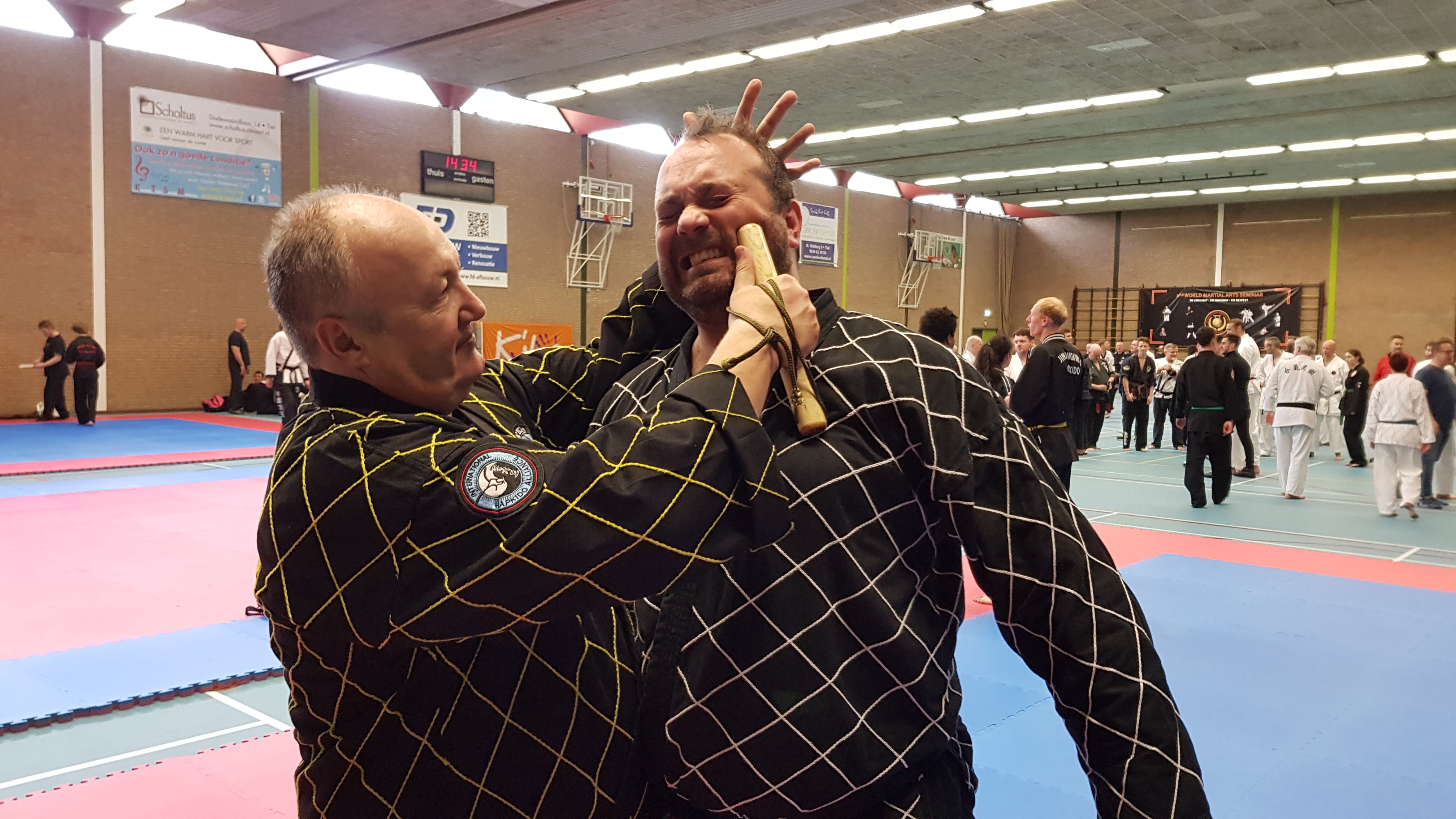 The next morning it was the Seminar day with 8-9 mats and the students attending could pick which mat they wanted to attend during each hour-long seminar, I got tech twice and covered Dan Bong in session one and Finger weaving in session two. Everyone enjoyed the Kwan Nyom pain, well they seemed too, some returned for session two after getting it in #1. A group shot was taken, some locals did some demonstrations and we wrapped up the day to get beautiful for the night. Onto the awards banquet where a large group of people of all ranks, styles and nationalities were awarded/inducted. The next day it was time to hit the road for the drive to Amsterdam airport where I would be leaving early on Monday morning for my 3 flights into the USA. Because of my ticket conditions I need to be on Lufthansa for the long haul so that means flying from Amsterdam into Frankfurt, changing planes for the Frankfurt to Newark (New York) flight, clearing immigration and then grabbing the United flight into Yorktown, VA. Just another day for the Kwan Nyom Road Warrior. I am keeping my fingers crossed to a possible upgrade into the lofty heights of Lufthansa First Class for the Trans-Atlantic flight, if it comes through I get to visit the Lufthansa First Class Terminal, one of those bucket list frequent flyer things.

*Side Note* Lufthansa First Class Terminal – Is a standalone building that is located at Frankfurt Airport. It has its own separate security clearance area with obviously no lines, and when you enter the building you are assigned a Personal Assistant to make sure you are looked after properly. The building contains a buffet, ala carte restaurant, bar, lounge area, showers, offices, cigar bar, and nap rooms. Of course, getting from the Lounge to the flight should be easy, so the Personal Assistant arranges for you to ride out to your flight in a Porsche or Mercedes. 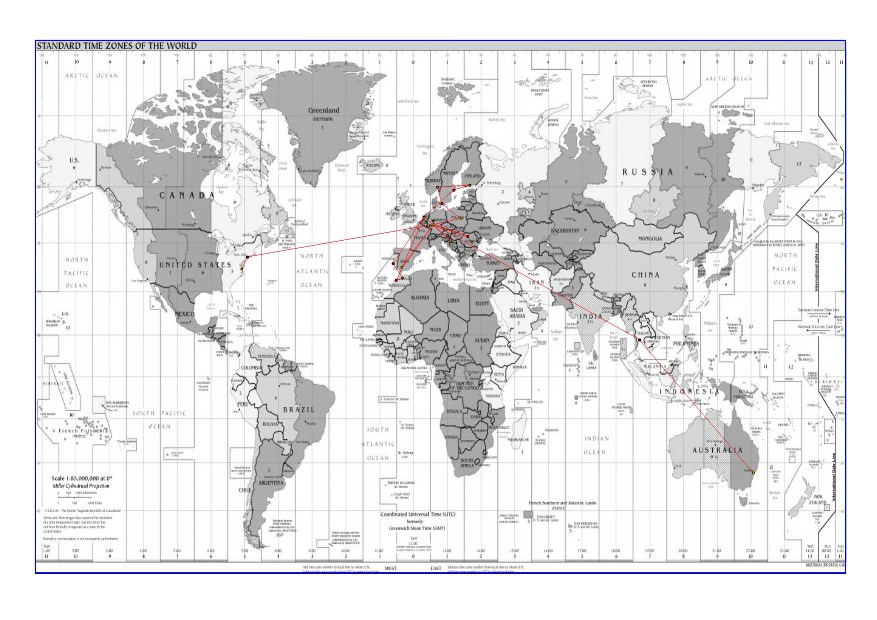 That concludes the 2018 World Tour Report for Europe + Morocco, head over to check out the USA/Mexico/Cuba one!
"The Art is in the Person, all we have to do is Bring it Out!"
Top

Thank you GM G. The Moroccan Experience looks great! Good to hear the weather is getting warmer
Top
Post Reply
3 posts • Page 1 of 1

Users browsing this forum: No registered users and 8 guests